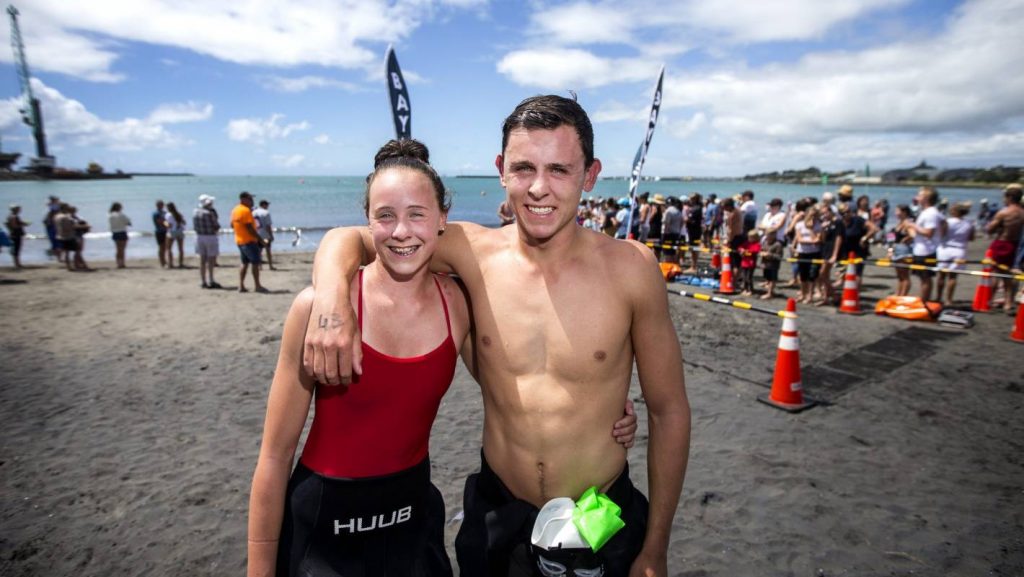 Taranaki’s iconic ocean swimming race has served up some sibling success this year.

Zac out swum 58 others who participated in the 3.6 kilometre race to claim the cup for the second year running, registering a time of 49 minutes and four seconds.

Cheered on by her brother and the crowd, 15-year-old Sasha won a foot race with Zarhn Collins, 17, to cross the finish line in third place. Her efforts in the water also meant she was the first female competitor home.

The aquatic event, which has been held in New Plymouth nearly every Waitangi Day since 1916, was revitalised this year after it was nearly cancelled due to a lack of people to run it.

But its resurgence saw a boost in entries and about 160 taking part across the different race events, which included a shorter 1.2km swim, a masters category and relay races. Entrants ranged in age from 10 to 73 years.

Zac said it was satisfying to have a win at home and it was his way of giving back to the swimming community which had given him so much support in the past.

He was now gearing up for the New Zealand Surf Life Saving Championships in March and will also compete in the upcoming national swimming champs in a quest to qualify for the Youth Olympics and the Pan Pacifics.

Watching on were two budding swim stars, Bella Pivac, 13, and Caro Olliver, 11, from the Opunake Surf Life Saving Club. The girls took part in the relay race, where they had to complete a 200m leg each, in what were described as choppy conditions.

Both girls had been swimming since they were young children.

Caro said the sport helped keep her fit, while Bella believed swimming was a good skill to have.

“It’s good to learn so you know what to do to stay out of trouble in the water,” she said.

When asked if they preferred the pool or the sea for a dip, the girls replied quickly, and in unison.